Recently I needed to get some fresh air, and I was really well served in the very eastern part of Switzerland. As I had some video work to do in the Rhine valley, I looked for some hidden camping spots nearby.

Liechtenstein looked like a perfect plan to me, especially as I had never visited the place before. The situation with steep mountains and a relatively densely populated area made it difficult to find a suitable place for the nights. But I found one about one hour ahead of the Fürstensteig (prince trail), as well as a second one right after the descent from the Drei Schwestern (three sisters). Without any water source indicated on the map I planned to carry 4 liters of drinking water with me for the three days.

It was slightly raining when I started in Steg, half way up to Malbun. And dense fog made it a very mystic experience walking up the ridge towards Plattaspitz (1703m). 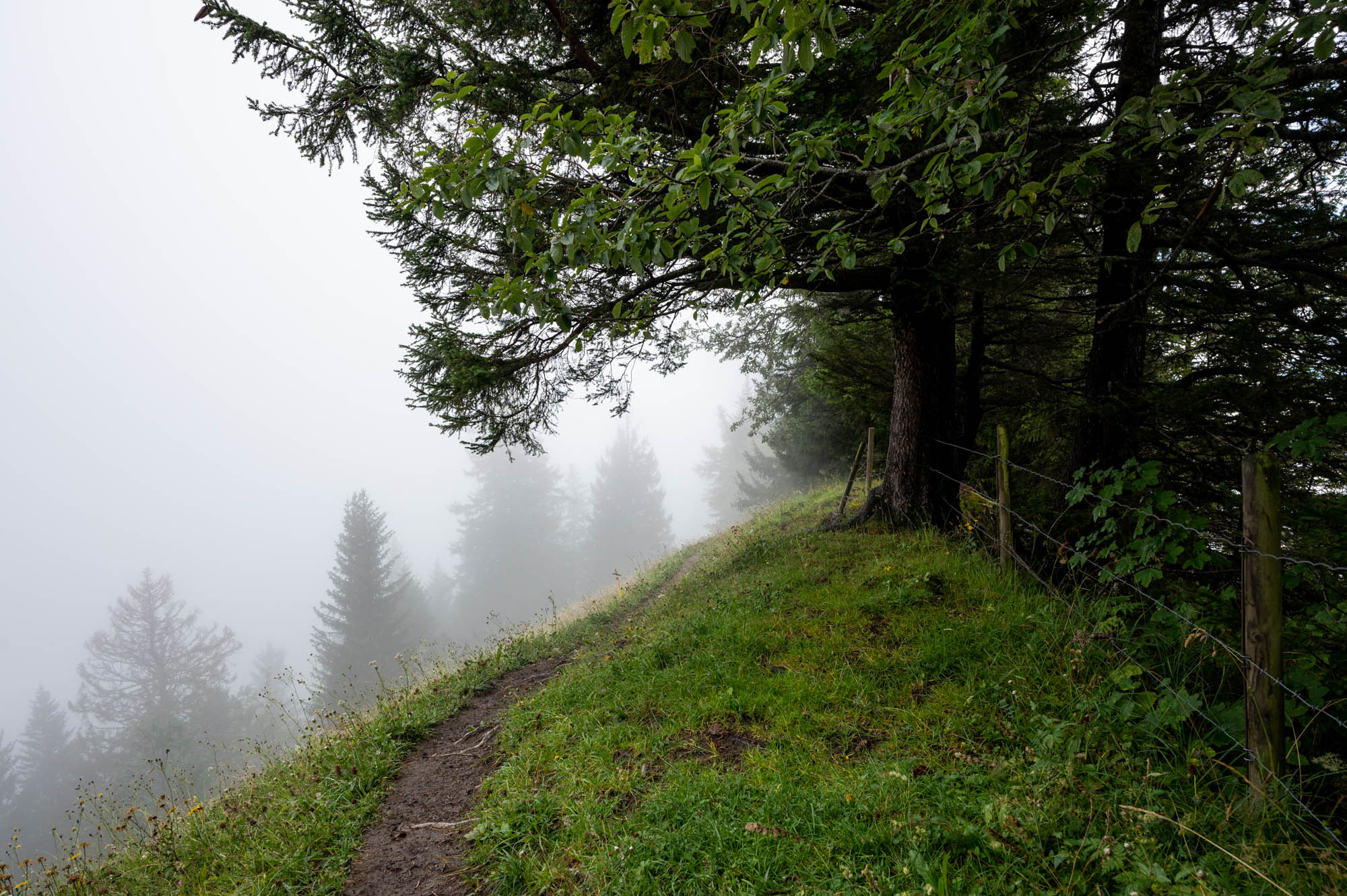 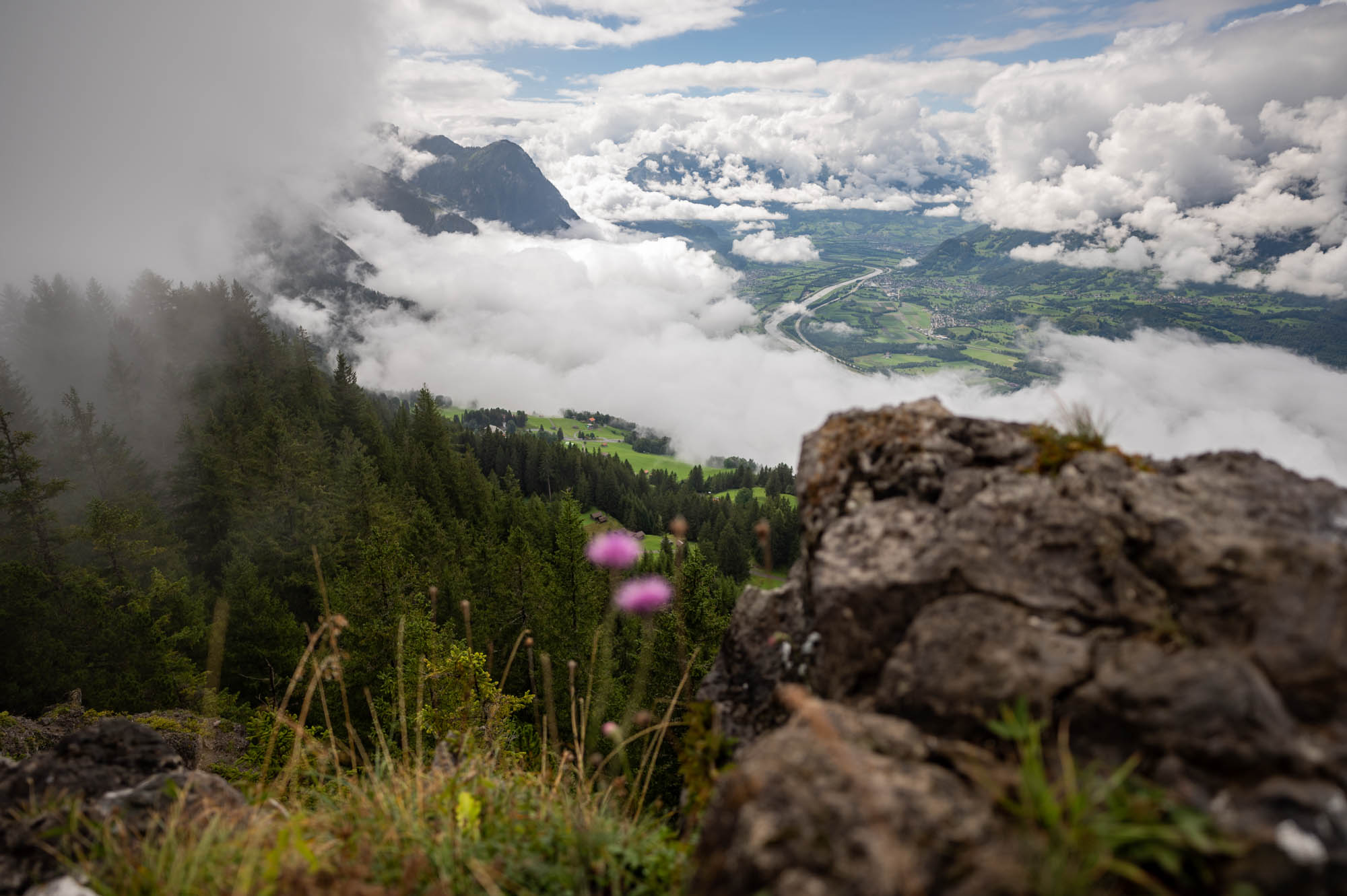 When I arrived at the spot where I planned to pitch my tent, the place looked perfect, just the necessary 2 square meters of flat grassland... But the place was already taken by some grazing horses which did not look like they would share the spot with me for the night.

The next hour I tried to spot another place and was almost thinking about camping in someone's garden down in the next village, when I found this water reservoir with a green, flat roof - And to make it perfect is was fenced to keep the cows out!

And in addition the place featured a nice view over the Rhine valley: 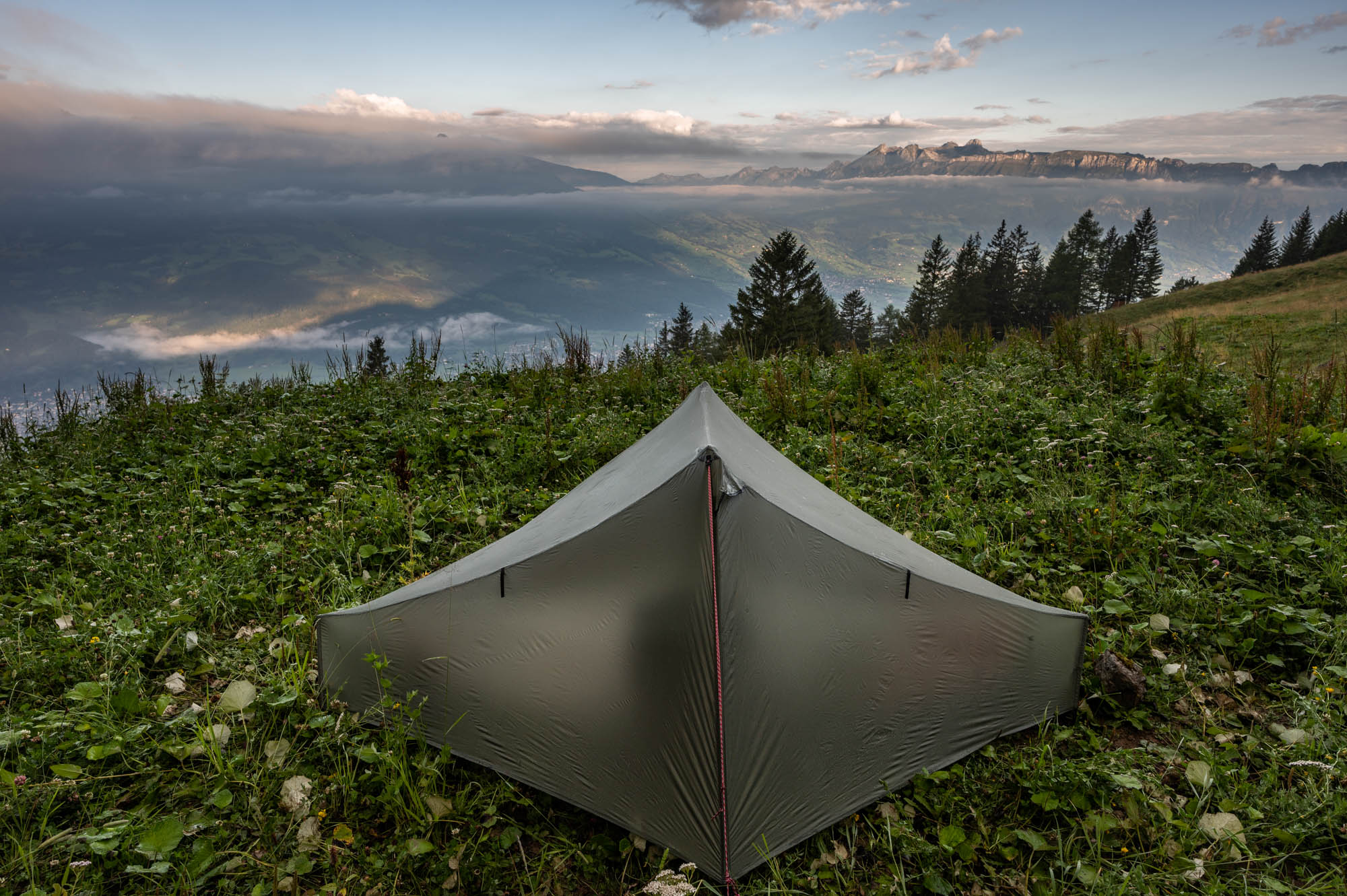 Once the tent was pitched it started raining, the perfect moment to open a book. And I hereby declare Fabrice Midal's Foutez-vous la paix! (The French Art of Not Giving a Shit: Cut the Crap and Live Your Life) the best book ever for rainy wild camp nights :) 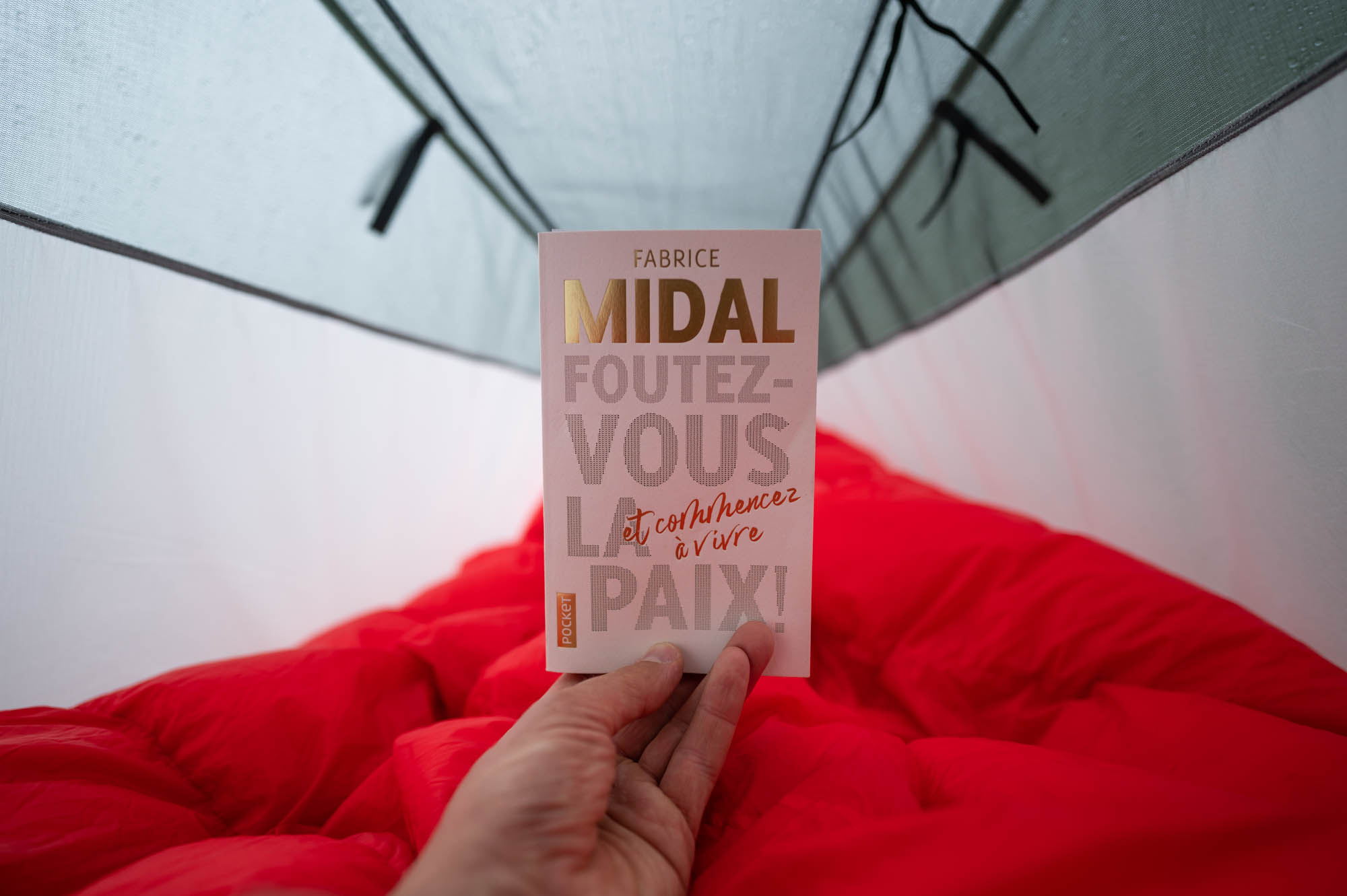 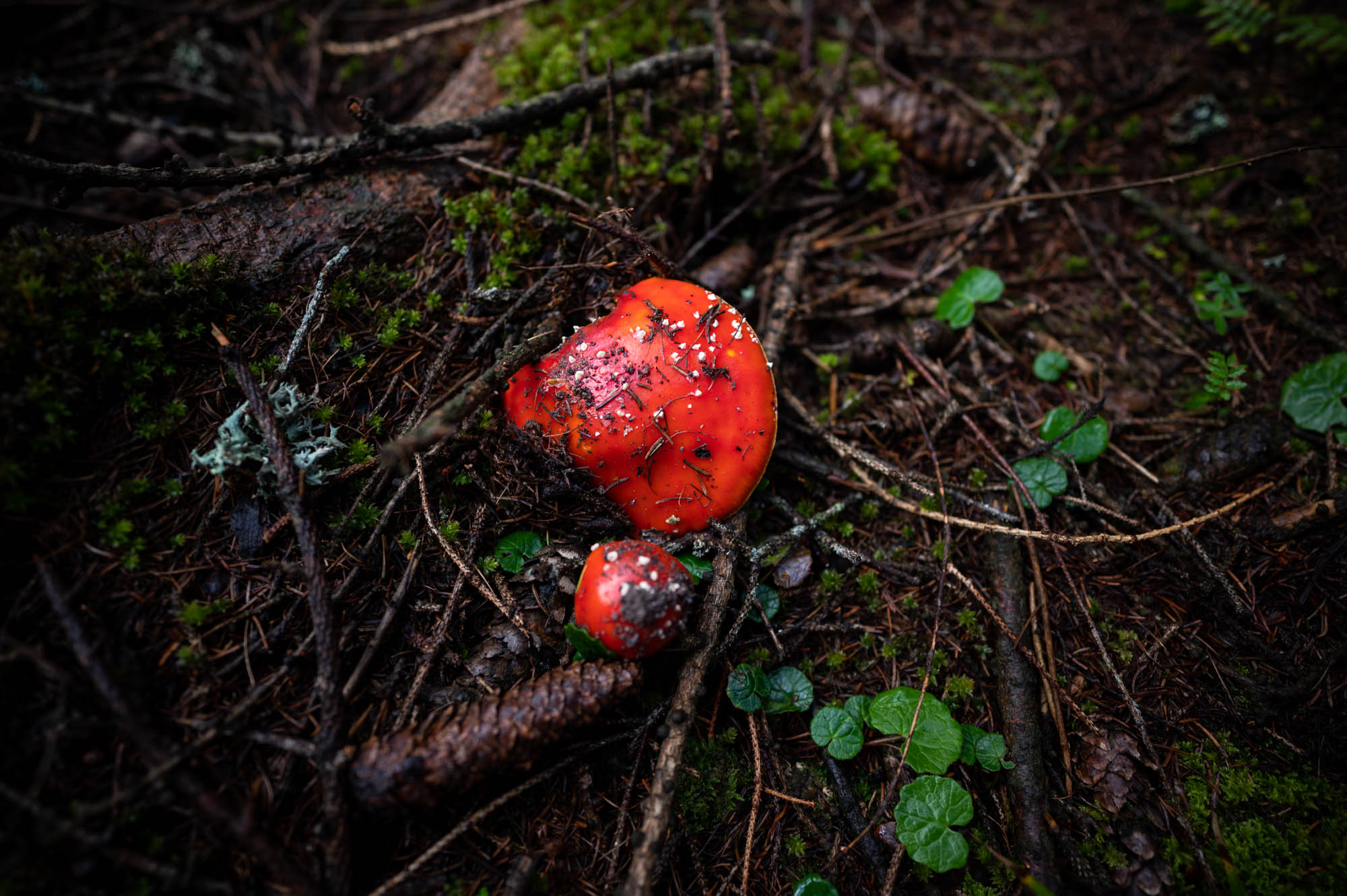 The water reservoir or camp site was close to the trail head of the Fürstensteig, offering an early morning start on this crazy path. The path turns through steep scree slopes and is partially secured. Therefore, surefootedness is absolutely necessary and fear of heights a nogo on this tour. But you are awarded with breathtaking views over the Rhine valley and the town of Schaan with it's distinctive church. 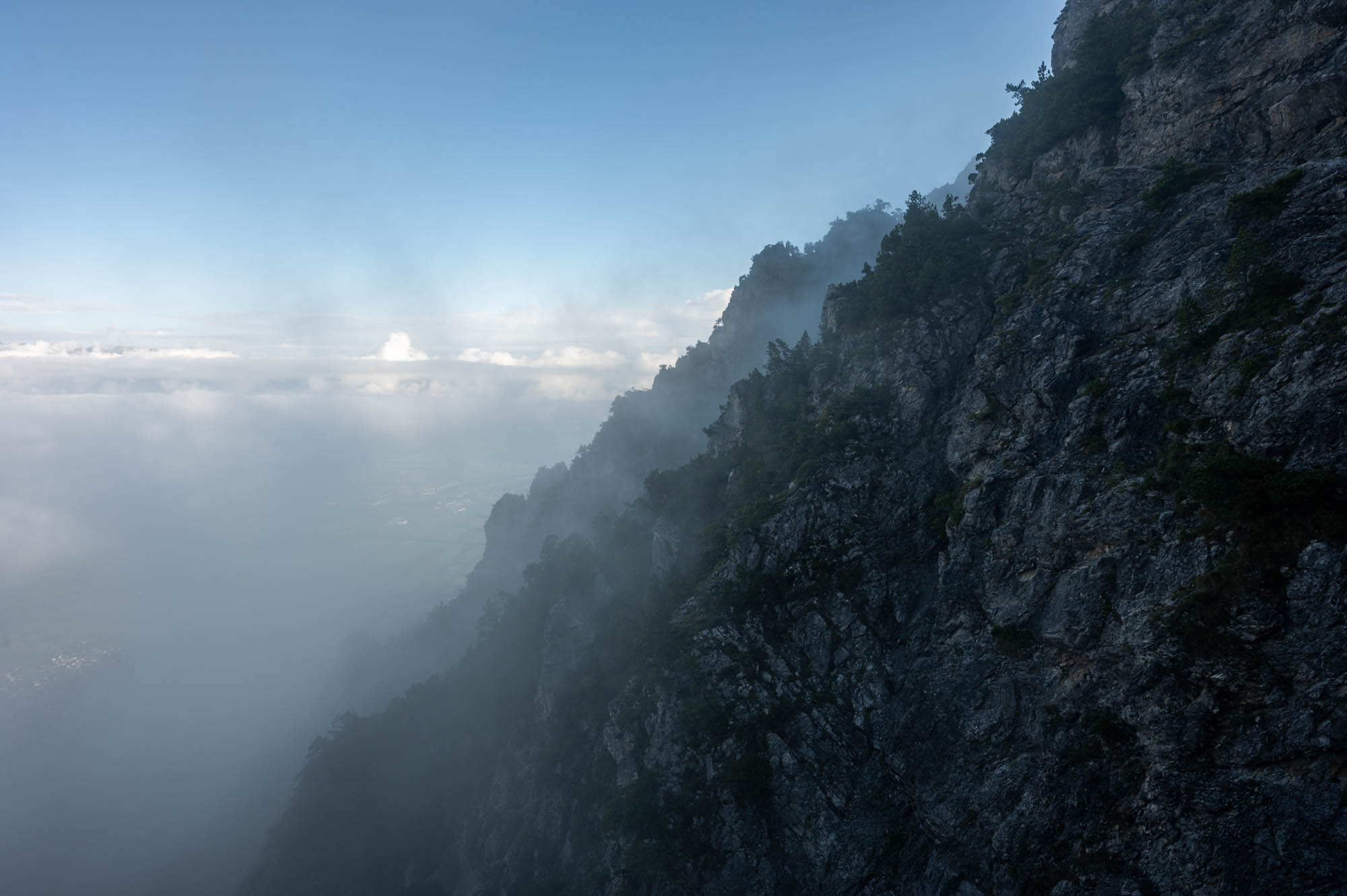 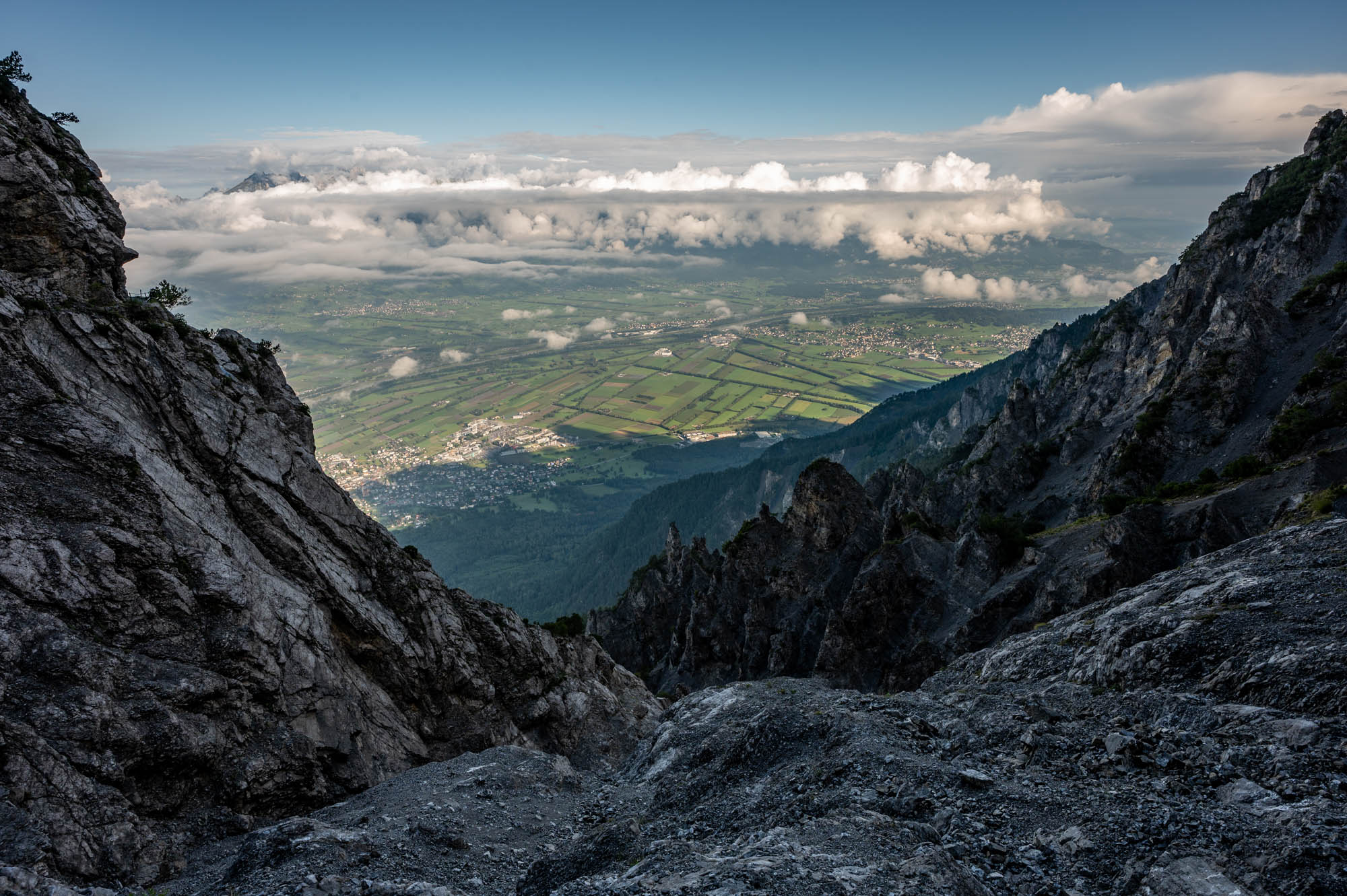 The Fürstensteig ends on the Gafleisattel, opening the view to the Garsälli basin with the Drei Schwestern hidden in the clouds: 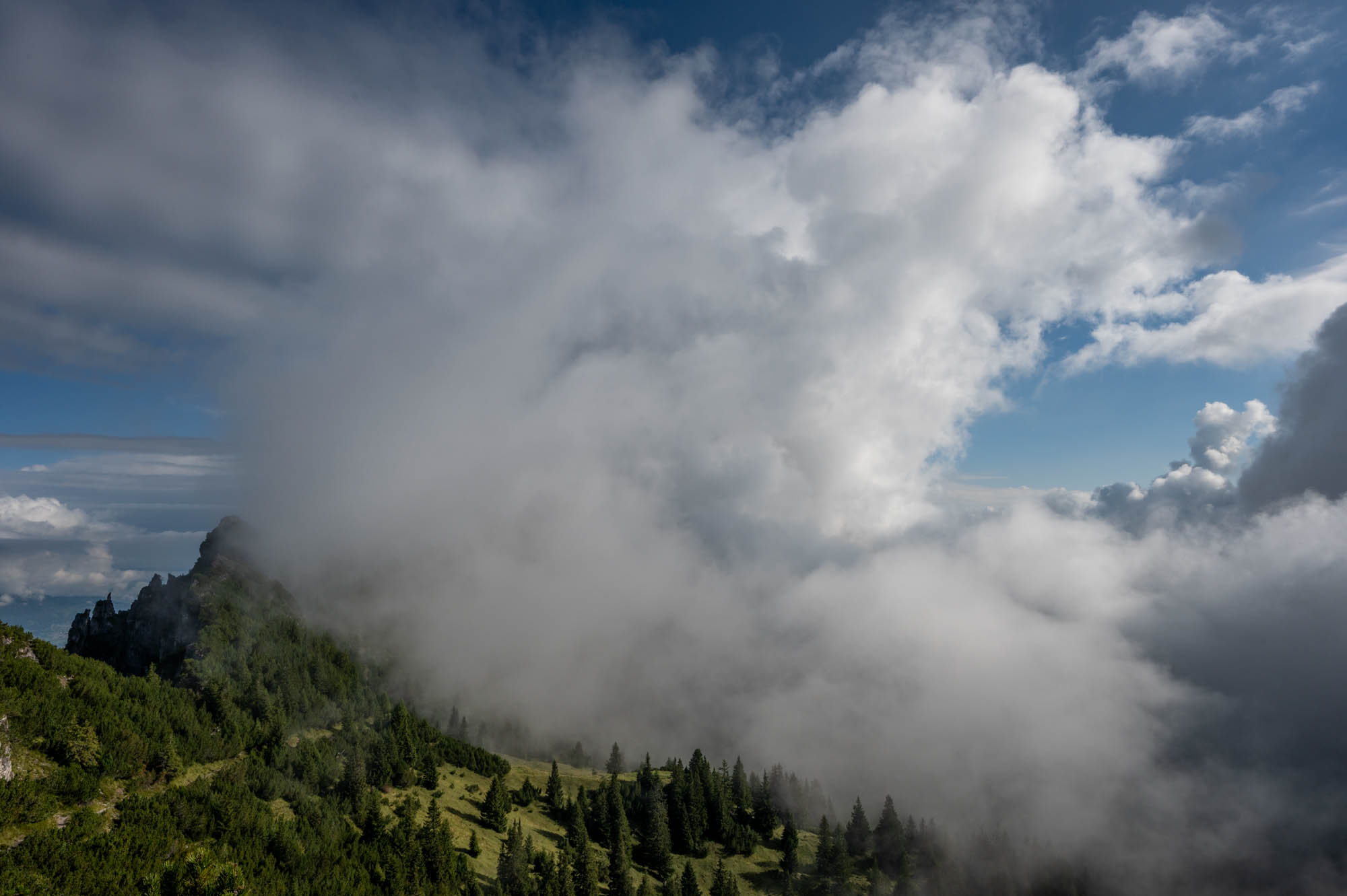 Next stage was a long walk over the ridge with Gafleispitz (1982m) and Kuegrat (2122m), offering again ever changing views to the valley, and lots of fog in the Saminatal. 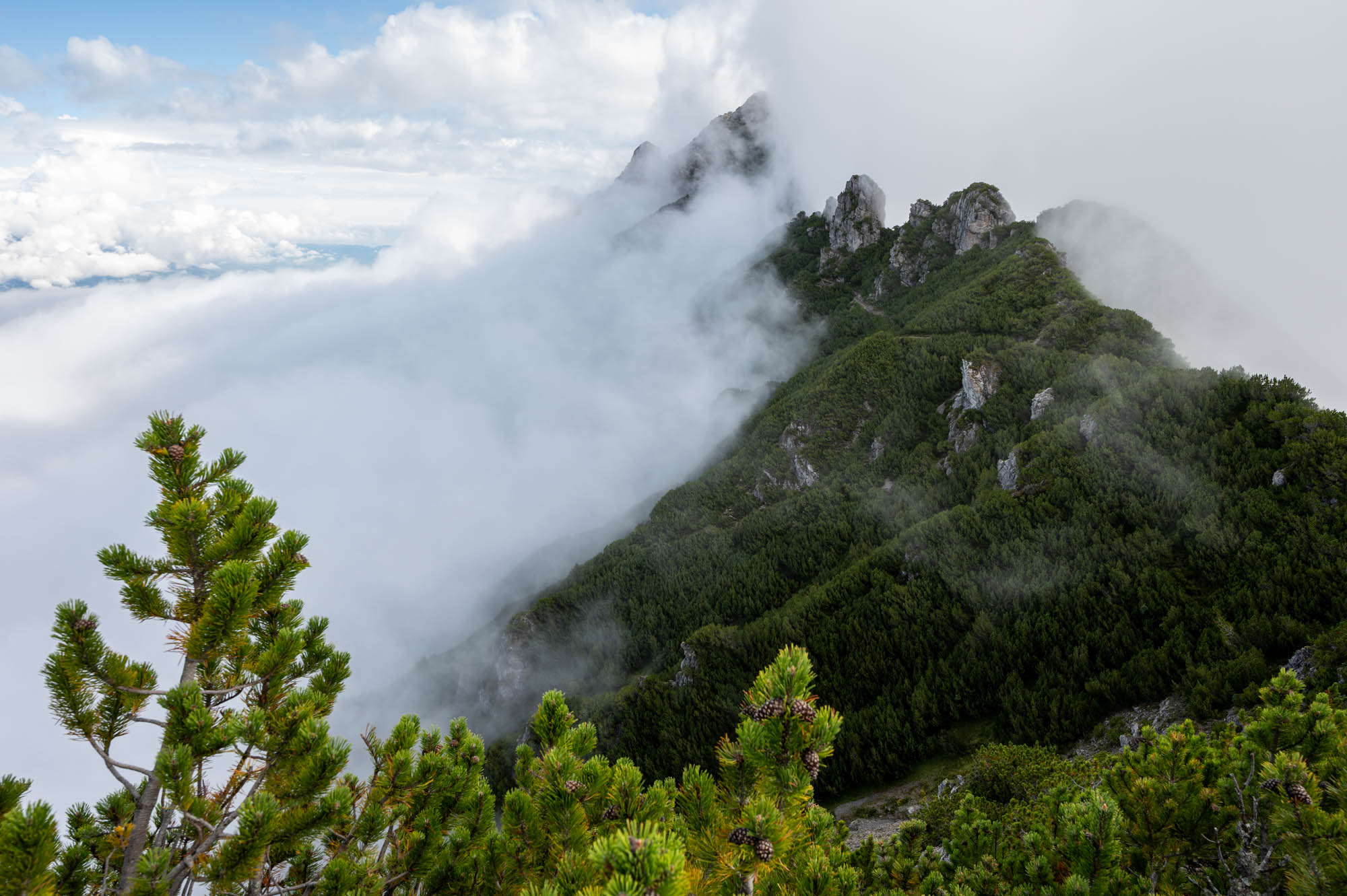 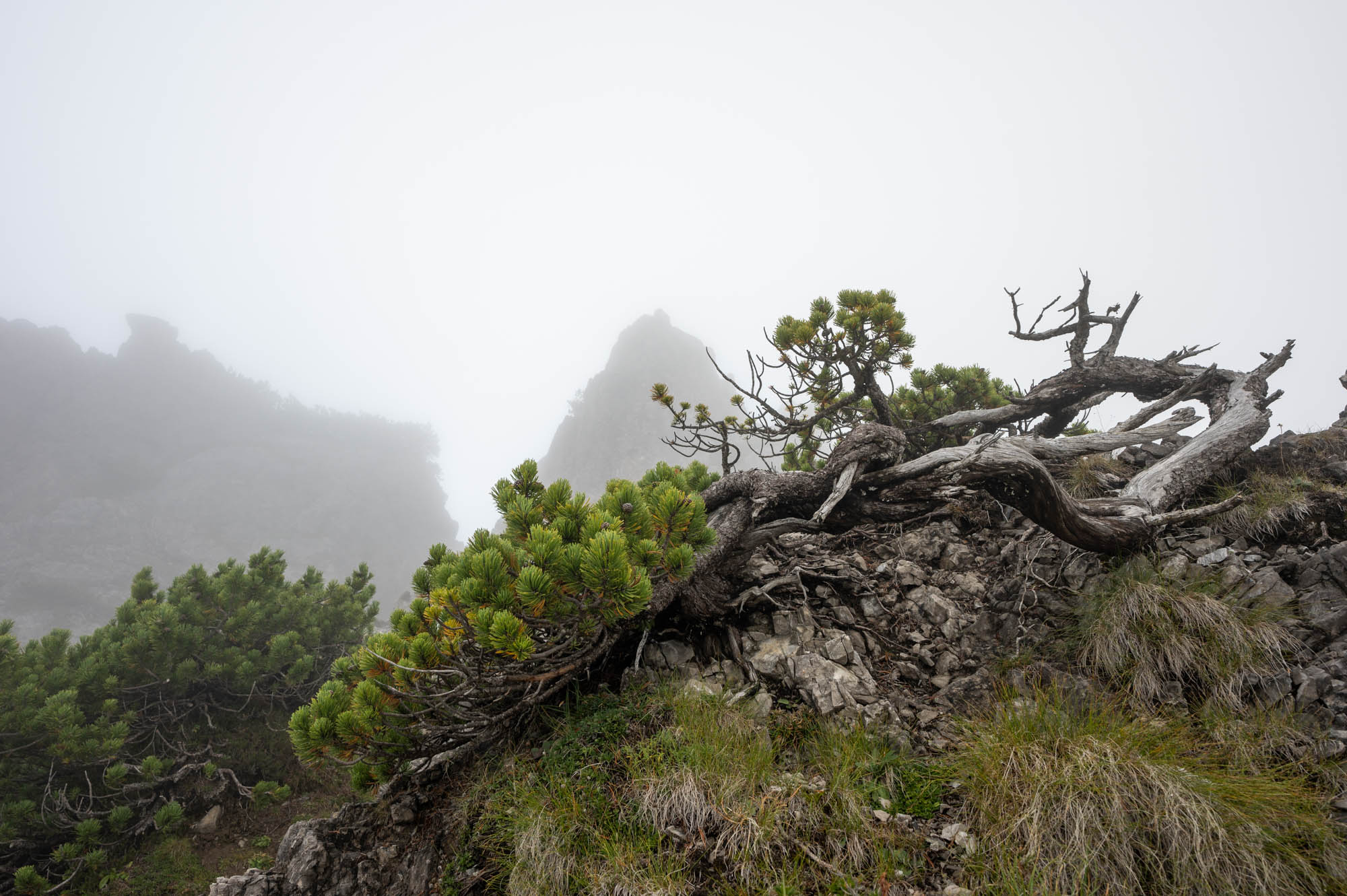 The absolute highlight of the tour was the ascent to the first of the Drei Schwestern. Quite a bit of climbing but always secured with ladders or cables.

There is hardly a place to stand on the summit, around the rock it drops steeply. The view is accordingly stunning... 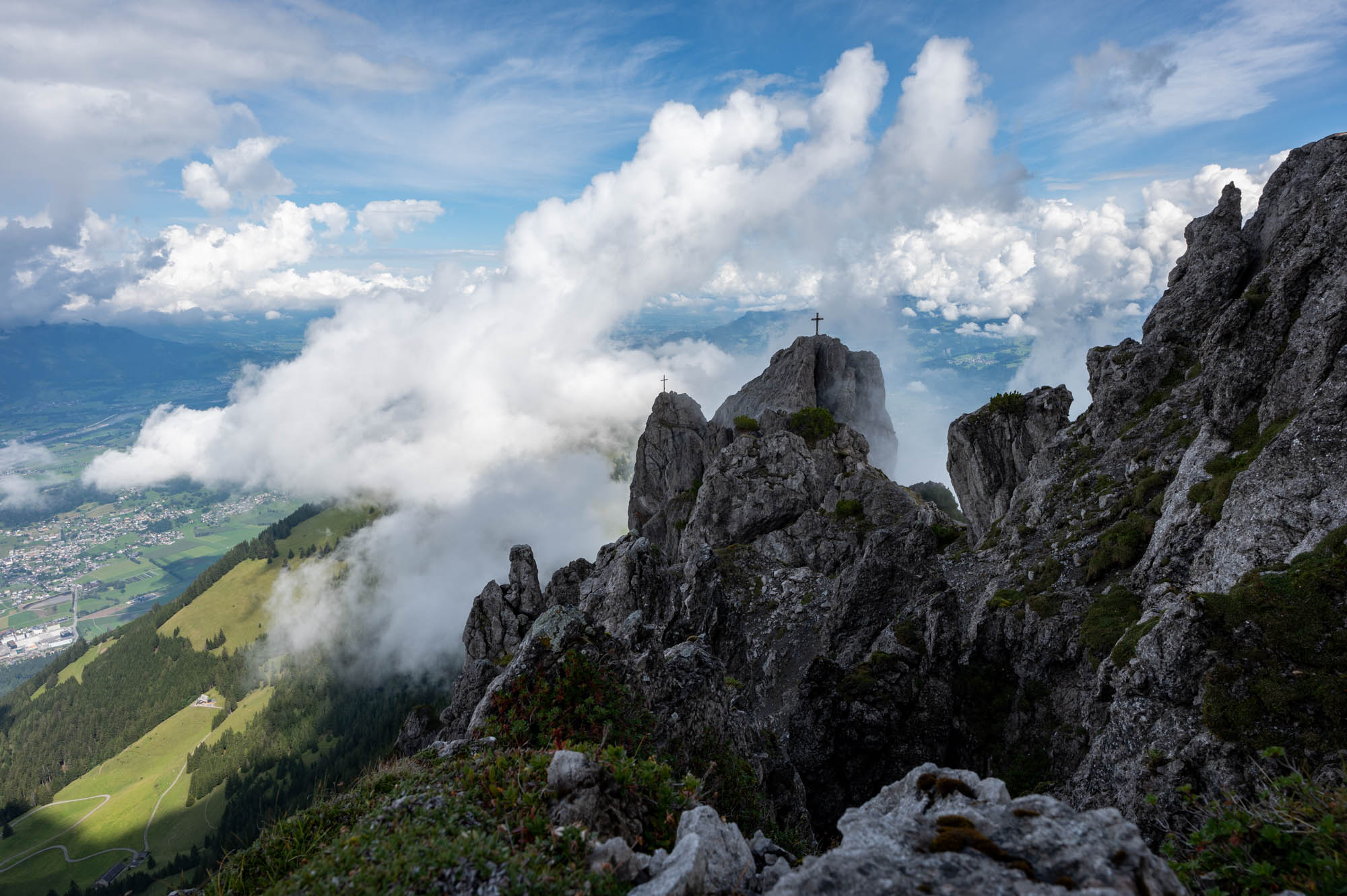 Descent is another matter. In certain places you first have to understand where the path continues. Directly at the abyss there is fortunately a ladder or a narrow path secured with cable: 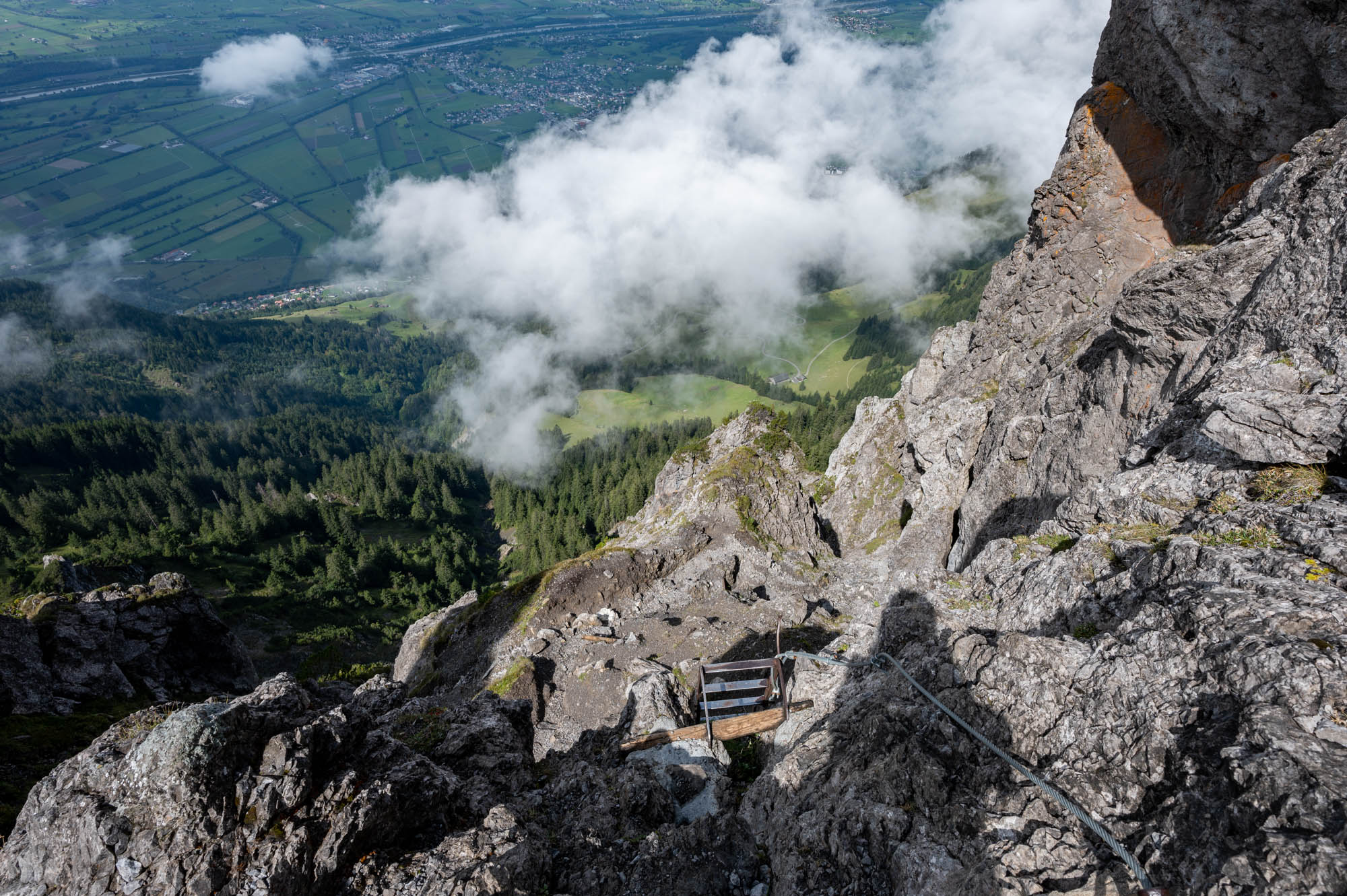 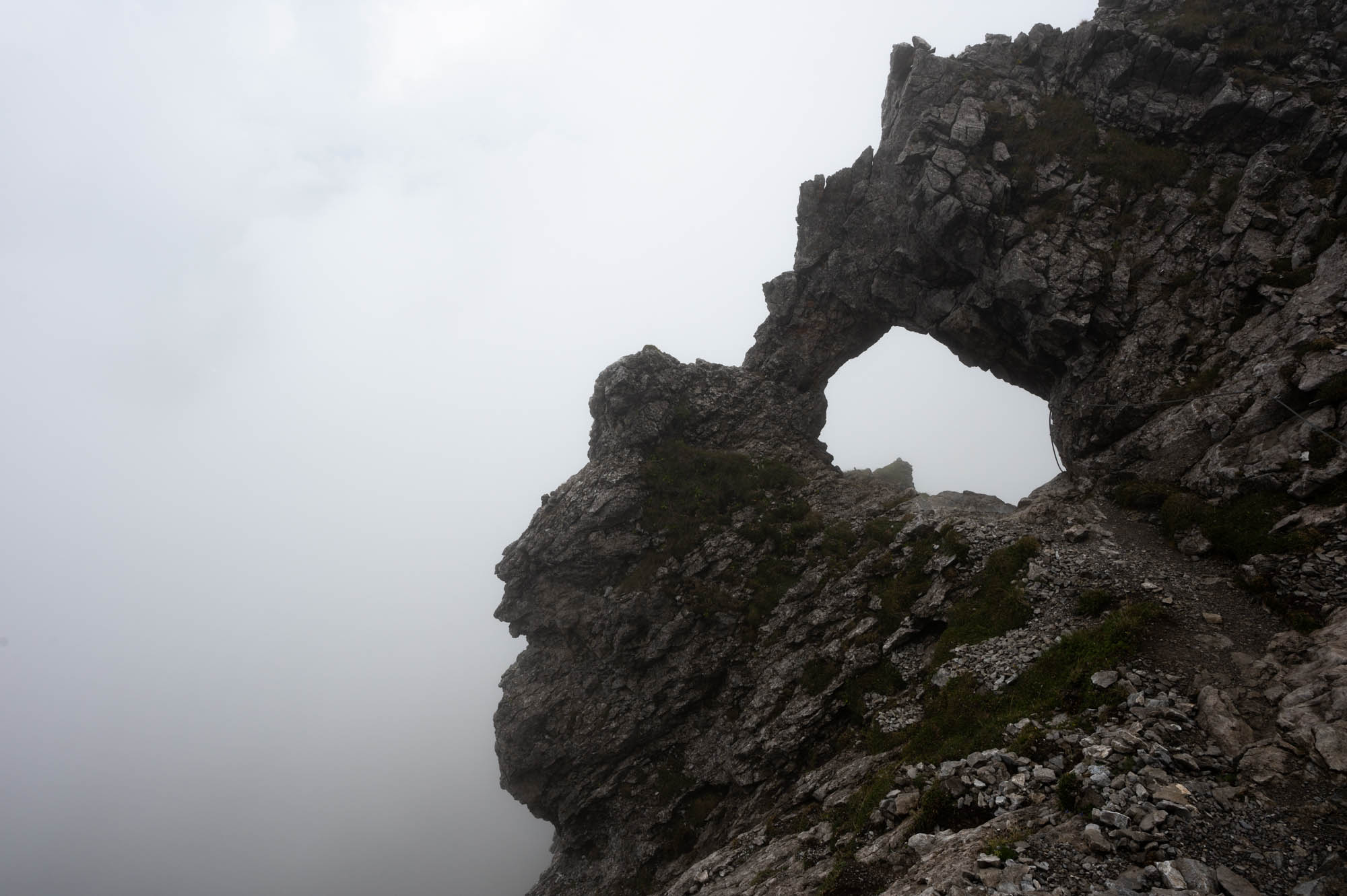 For the second night I have more luck concerning camping; Not exactly a big piece of flat land but enough for my notch, right on the border of Liechtenstein and Austria: 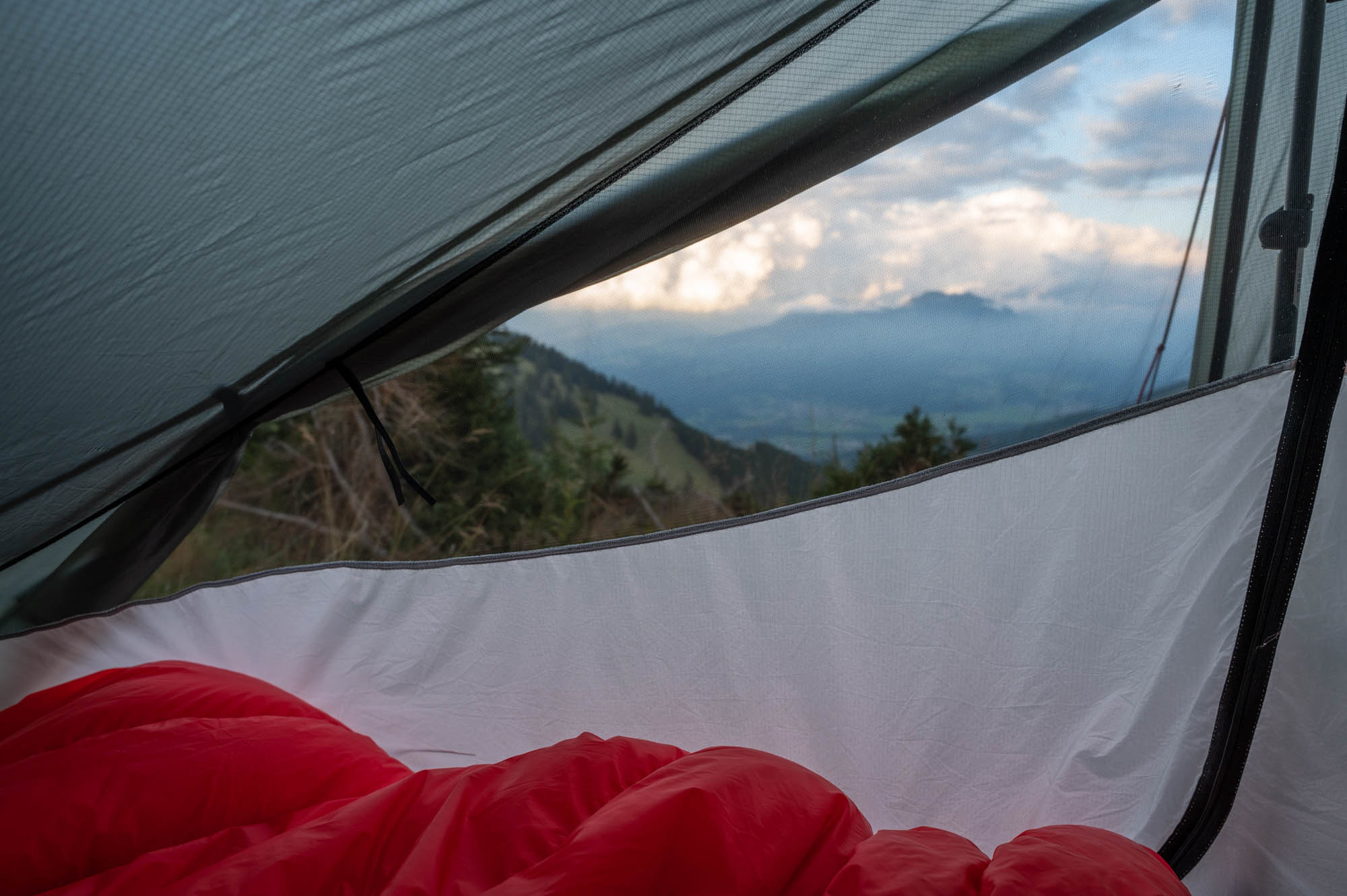 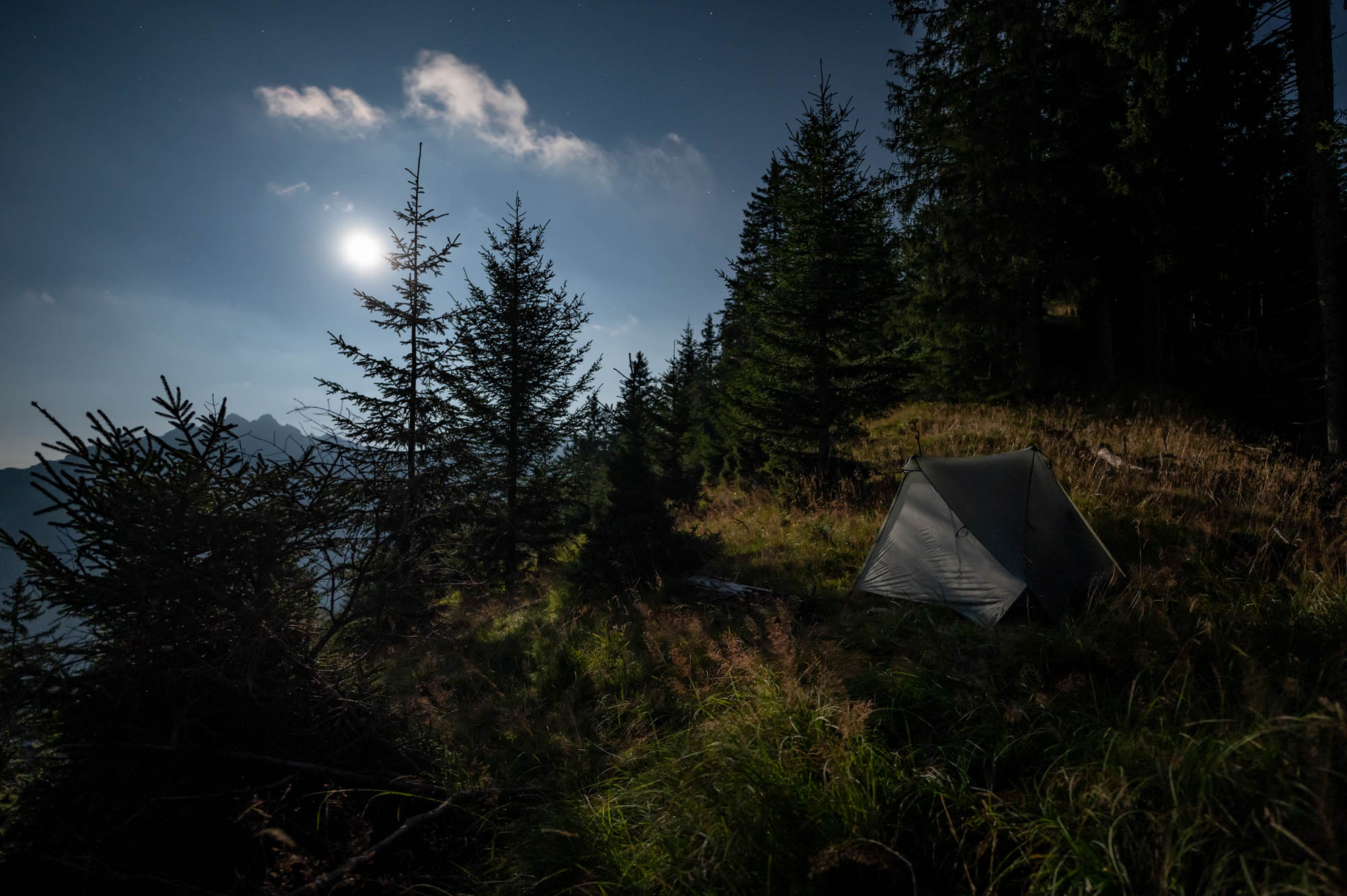 In the morning the weather is still undecided but delivers a great sunrise, after a clear night with a full moon spectacle. 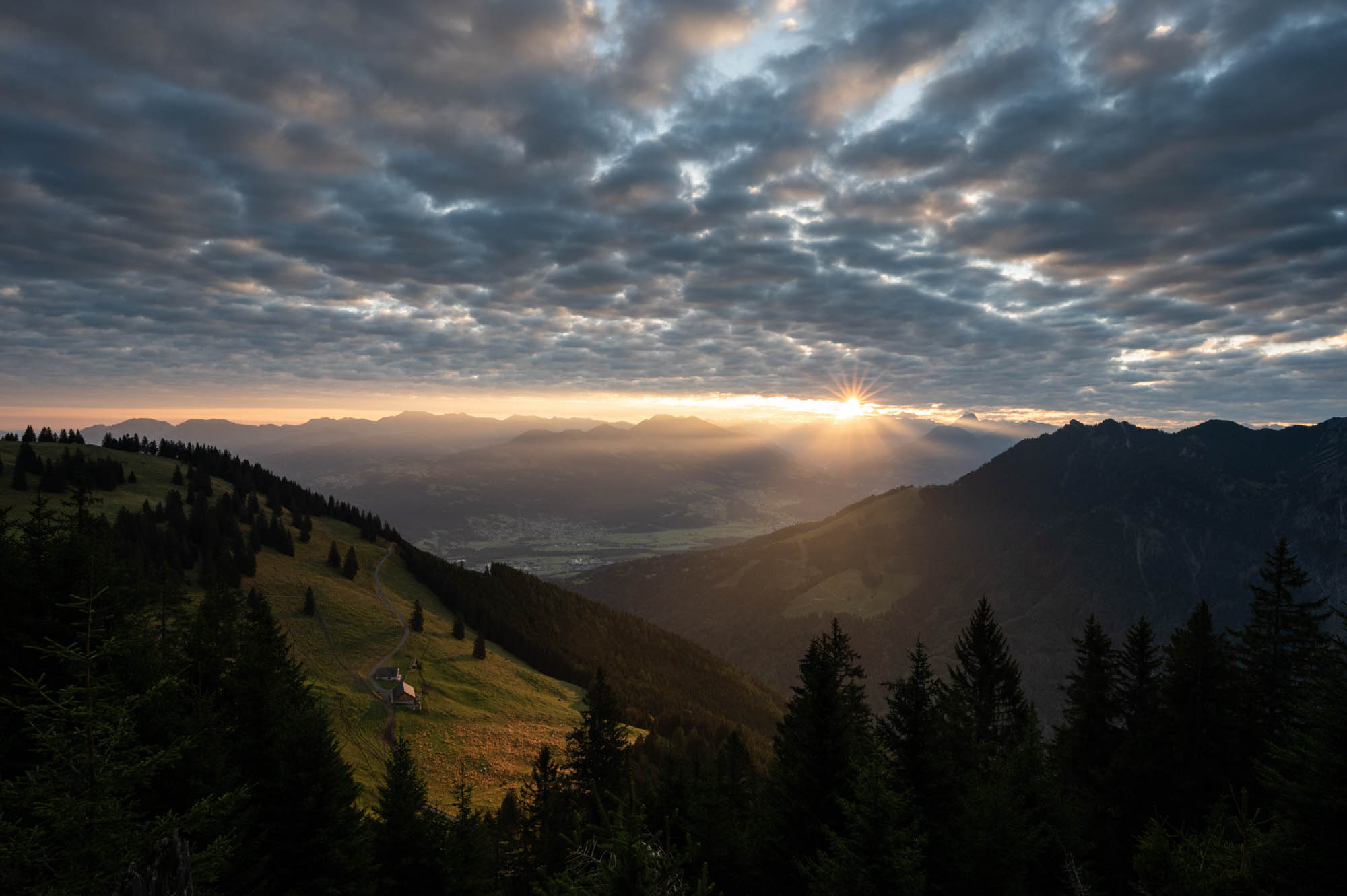 Thanks to the rather cool weather the 4 liters of water were just enough but I was happy to do the last descent to the Gafadurahütte where I allowed myself one or two coffees... 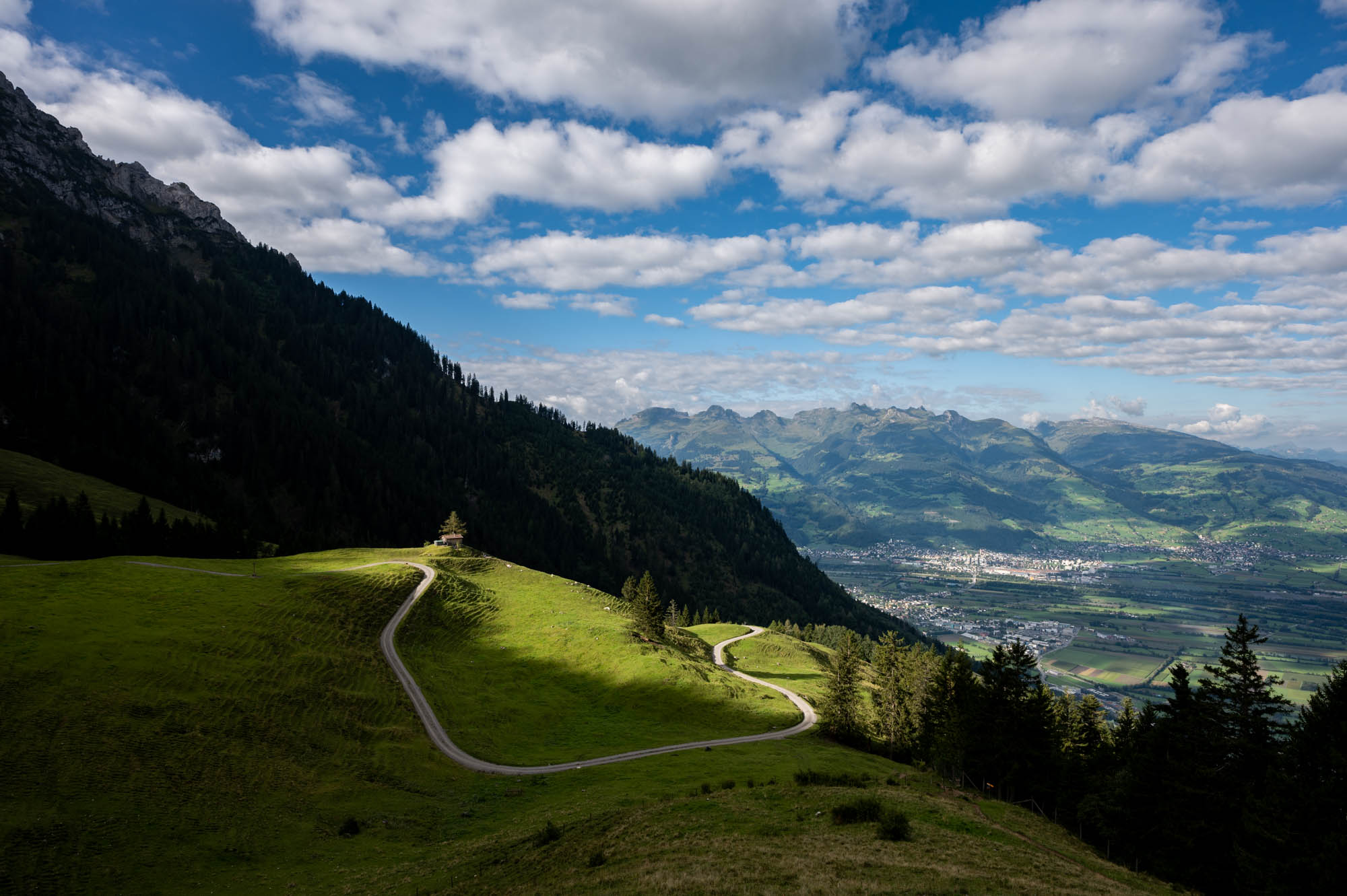